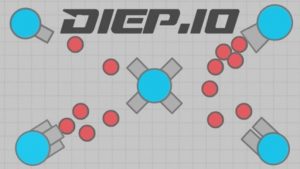 Diep.io has you playing a simple geometric tank, blasting away at blocks and other players to become stronger. As you accumulate points and level up, cool upgrades become available. You can choose to become an agile tank that shoots rapid-fire bullets or a slow, lumbering machine that blasts cannons in all directions. The choice is yours!

How To Play Diep.io

Managing your tank may take some time getting used to, but it’s intuitive and soon you’ll be an expert at dodging and shooting at the same time.

Type in your Name and hit the Enter key. You’ll be at the helm of a circular tank with a single turret. Use the WASD keys to move forward, left, back and right and tap your left mouse button to shoot red bullets. Move around the battleground and you’ll discover yellow blocks and blue shapes that you can blast for score and XP.

When you get enough XP you can upgrade your tank to have more health, regenerate, shoot faster, increase bullet damage and so on. Hit milestone levels and you can choose how to evolve your tank- would you want two turrets or a huge cannon? Would you rather be a Sniper or a Sprayer?

In Diep.io, being able to evade incoming bullets is a more valuable skill than being able to shoot moving tanks and objects. Practice on your movement via the WASD keys to reach higher levels and you’ll have a greater chance to advance up to the top of the leader boards. Invest in movement speed to become a harder target to hit, especially for tanks who fire slow, powerful projectiles.

As soon as you level up and see evolution choices, go to the nearest safe spot where there are no opposing players before upgrading. Safe areas are usually ones at the edge of the map, but keep an eye on sneak attacks by having your fingers ready at the WASD. Don’t rush and keep your play-style in mind when you allocate those skill points.

If you love to move quickly and shoot streams of bullets, then it makes sense to put your points in Movement Speed and Bullet Speed. If you want to be an immovable fortress, then invest in HP, Toughness and Bullet Power. Also, evolve to your playing style, i.e., get sniper for long-distance fighting or get more turrets if you want to stay in one place.

Try Out The Game Modes

Diep.io has several game modes that add depth and excitement. You can go for the FFA (free for all), Survival, Domination, Tag and Maze and compete with players from all over the world. If you’re with friends, you can choose the 2 Teams or 4 Teams and blast away. The Sandbox is like Practice Mode where you can hone your shooting and movement skills at your own pace. Once you’re acclimated and hungry for some online action, test your mettle at the multiplayer modes in an effort to reach the top spot in the leader boards.